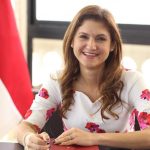 Minister of Foreign Affairs of the Republic of Panama

Erika Mouynes is the Minister of Foreign Affairs of the Republic of Panama. She has also served as Vice Minister of Multilateral Affairs and Cooperation and Chief of Staff of the Ministry of Trade and Industry, under two administrations. During that time, Mouynes served on the negotiating team responsible for the US-Panama Free Trade Agreement.

Prior to her role in government, Minister Mouynes worked at a leading global law firm in New York. She also managed the business and legal affairs of a multi-billion-dollar investment company in her role as Chief Legal Officer.

Mouynes has served on the board of several publicly traded companies, as well as women-focused not-for-profit organizations.

This past year she led a team of Panamanian experts who successfully designed and negotiated the country’s vaccine portfolio based on scientific criteria, making it one of the first countries in Latin America to secure vaccines for its entire target population.

She has made it her post-pandemic priority to facilitate political dialogue on raising ambition in the region for increased climate action and has placed Climate Diplomacy as a core priority of Panama´s Foreign Policy.

Panama has played a leading role in the fight against climate change and has shown high commitment with the implementation of an inclusive green agenda and allocating important resources to the protection of land ecosystems and marine resources.

Ms. Mouynes has played a key role to strengthen Panama´s presence in multilateral forums and gain leadership in the region as a referent for environmental conservation and sustainable economic development models.