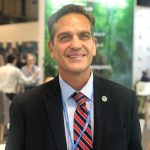 Prior to his current role, he was Director and Representative of UNOPS in the MERCOSUR region, based in Argentina. He was formerly Division Manager of Investment and Development Banking at the Central American Bank for Economic Integration. Javier also worked as the Executive VP for two privately held banks of Grupo Fierro. His career in banking and finance began with Banco Santander/BSCH in the United States, Hong Kong and Japan.

Javier was the first Chairman of the Board at IASE, The International Association for Sustainable Economy. He holds a dual MBA from Northwestern University / Kellogg (USA), an EMBA from Hong Kong University of Sciences & Technology (China), and Ph.D. in Sustainability Management from Inha University in South Korea.