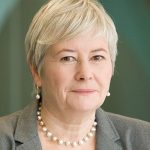 Joan MacNaughton has played an influential part in global energy and climate policy for twenty years in government, business, the not-for-profit sector and academia.

She is currently an Independent Non-Executive Director of En+ Group, and of Heathrow Airport Holdings Ltd, and is Chair of The Climate Group and of the Advisory Board of the New Energy Coalition of Europe. She sits on the Strategic Advisory Board of Equans  UK, and is a member of the advisory boards of the Grantham Institute at Imperial College/ London School of Economics, and of the Joint Institute for Strategic Energy Analysis in the USA.

She is an Honorary Fellow of the UK Energy Institute and  the International Emissions Trading Association, and a Distinguished Fellow of the Institute of Energy Economics, Japan; the Global Federation of Competitiveness Councils; and the Climate Global Leaders’ Network.

Previous roles include Chair of the World Energy Council Trilemma, Chair of the International Energy Agency and Vice Chair of the UN High Level Panel on the Clean Development Mechanism of the Kyoto Protocol.

She was formerly President of the UK Energy Institute and a member of the Board of Governors of the Argonne National Lab in the US. While in the UK Government, she held a wide range of positions including as Chief of Staff to the Deputy Prime Minister to Prime Minister Thatcher, and later to two Cabinet Ministers.

From 2002, as Director General of Energy, Joan played a key role in shaping UK and international energy policy. She has extensive Board experience in the public and private sectors.