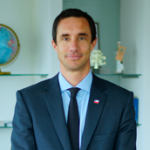 Minister of Energy and Mining of the Republic of Chile

Juan Carlos Jobet is Minister of Energy since 2019, leading Chile’s energy transition and carbon neutrality plan, including a phase-out plan for all coal power plants, the accelerated deployment of solar and wind capacity and an ambitious green hydrogen strategy to position Chile as a top global producer and exporter.

In 2020 he was appointed as bi-minister of Energy and Mining, undertaking the challenge of developing Chile’s first comprehensive mining policy: a long-term strategy built on ample participation which sets a vision for a greener and more competitive mining industry.

During 2010 through 2014, he held various positions as a government official under President Sebastian Piñera’s first mandate, including Minister of Labor and Social Security, Undersecretary of Housing and Urbanism and Chief of Staff to the Minister of the Interior.

In addition to his broad public service experience, he has held various private sector executive and board positions. Investment banking, pension funds, insurance, private equity, waste management, energy, mining and infrastructure are among the industries where he has been actively involved as a team leader and decision maker along his career.

Minister Jobet holds Master’s degrees in both Business Administration and Public Administration from Harvard University, having obtained his Bachelor’s degree in Business and Economics at the Pontifical Catholic University of Chile.