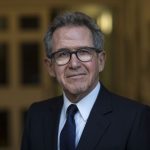 Chairman of BeyondNetZero and Windward

Lord Browne was born in 1948. He holds degrees in Natural Sciences from Cambridge and an MS in Business from Stanford.

He joined BP in 1966 as a university apprentice, between 1969 and 1983 held a variety of exploration and production posts globally, and in 1984 was appointed Group Treasurer. He was Chief Financial Officer of the Standard Oil Company of Ohio during the BP/Standard merger of 1987, and served as Group Chief Executive of BP from 1995 – 2007. During that period he created the world’s first supermajor through a series of mergers and acquisitions, including BP’s merger with Amoco in 1998. His landmark speech at Stanford University in 1997 established BP as a global leader in the way it thought about, and sought to address, climate change.

In 2007 he joined Riverstone, where he was co-head of the world’s largest renewable energy private equity fund until 2015. He is currently Chairman of BeyondNetZero, a climate growth equity venture established in partnership with General Atlantic. Lord Browne is Chairman of Wintershall Dea, Europe’s largest independent gas and oil company. He sits on the boards of IHS Markit and SparkCognition, and is Chairman of Pattern Energy, Stanhope Capital and Windward. Lord Browne is a member of the advisory boards of Edelman, Schillings, Blue Bear Capital, the Angeleno Group, Hyperloop TT, Kayrros and Loop Energy. He is an investor in numerous companies operating at the intersection of science, engineering, energy and climate change, including ChargePoint and Independent Energy Standards (IES).

Lord Browne was voted Most Admired CEO by Management Today every year between 1999 and 2002, was knighted in 1998 and made a life peer in 2001. He has previously served on the boards of Goldman Sachs, Intel, DaimlerChrysler, SmithKline Beecham and Huawei UK.

He was the UK Government’s Lead Non-Executive Board Member from 2010 to 2015, and chaired the committee that authored the Browne Report, an independent review of higher education published in 2010.

In 1999, The Royal Academy of Engineering awarded him the Prince Philip Medal for his outstanding contribution to engineering. He has also been awarded Honorary Doctorates from a number of leading universities, is an Honorary Fellow of St John’s College, Cambridge.

His interests are 16th- to 18th-century illustrated Italian books; pre-Colombian art; contemporary art; music; opera and the theatre; and Venice.

Lord Browne is the author of Beyond Business, Seven Elements that Changed the World, The Glass Closet: Why Coming Out is Good Business and the Sunday Times bestseller Connect: How Companies Succeed by Engaging Radically with Society. His fifth book – Make, Think, Imagine: Engineering the Future of Civilisation – was published in May 2019.