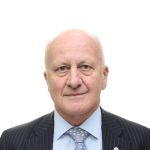 From 2014 to 2020 John Loughhead served as Chief Scientific Adviser to UK Government Departments, firstly for Energy & Climate Change and subsequently for Business Energy & Industrial Strategy where he chaired the Mission Innovation initiative and led the definition of its new phase announced this year.

He was previously Executive Director of the UK Energy Research Centre, a large university-based research consortium working on sustainable energy system futures. Until 2004 he was Vice-President Technology & Intellectual Property for the Alstom group, based in its Paris head office.

John is a Chartered Engineer, a Fellow of the UK, China and Australia national academies of engineering, Past-President of the UK Institution of Engineering & Technology, Fellow of the Institution of Mechanical Engineers, the City & Guilds of London Institute and of the Royal Society of Arts, Freeman of the City of London, and Governing Council member at University of York.