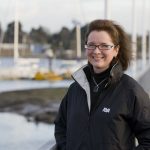 Sarah Treseder graduated Oxford University with a degree in Politics, Philosophy and Economics in 1991.

She held a range of positions at Diageo and became Chief Executive of the Royal Yachting Association in 2010.

She became a member of the British Olympic Association Board of Directors in 2011 has been a Younger Brother of Trinity House since 2012.