Biofouling can have a significant impact on ship hydrodynamics and energy efficiency and interfere with efficient operation of internal seawater systems. It can also threaten the marine environment through the transfer of non-native invasive species, or through the use of toxic anti-fouling systems.

This publication identifies ship structures that are vulnerable to biofouling, factors affecting the rate of build-up and the effect of biofouling on performance and operating costs. It briefly discusses a number of environmental research initiatives into the effects of biofouling.

The book looks in detail at biofouling management, including the use of biocidal and non-biocidal paints and coatings, marine growth prevention systems, in-water cleaning and treatment in dry dock.

Finally, it provides templates for the Biofouling Management Plan and the Biofouling Record Book and a selection of data sheets giving an insight into the spread and capabilities of hull cleaning and inspection companies worldwide. 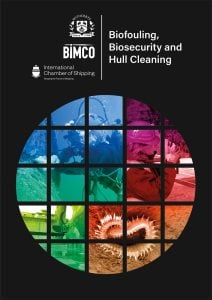