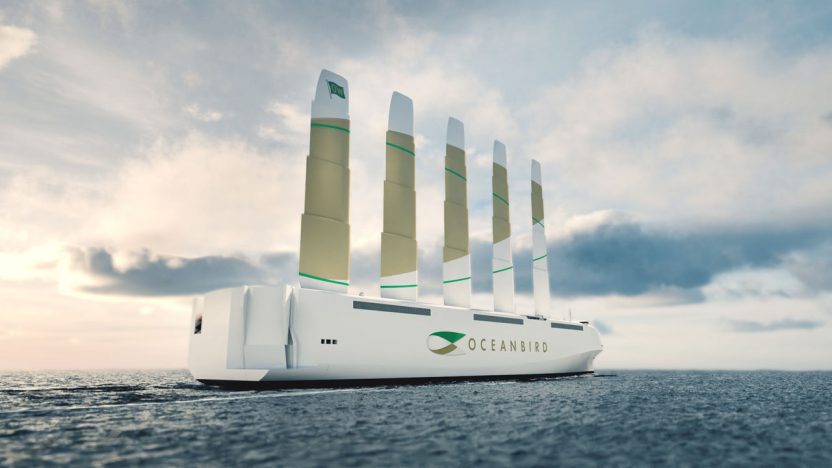 ICS is making proactive proposals to achieve the ambitious goals agreed by the UN IMO to phase out GHG emissions. This includes a total cut by the shipping industry of at least 50% by 2050.

In the two centuries international shipping has transitioned from sail to steam, and from coal to oil propulsion. As a result of the need to eliminate greenhouse gas emissions from ships, the industry is now on the brink of a ‘Fourth Propulsion Revolution’, possibly using a combination of hydrogen/ammonia and batteries powered from renewable energy sources.

ICS and its member national associations are committed to the phase-out of greenhouse gas (GHG) emissions in line with the Initial Strategy on the Reduction of GHG Emissions from Ships adopted by IMO in April 2018.

The IMO strategy establishes very ambitious targets, including the phase-out of GHG emissions “as soon as possible this century” and reducing annual GHG emissions from international shipping by at least 50% by 2050 compared to 2008.

ICS is confident that the radical solutions required will eventually be found. However, the technologies necessary to achieve these ambitious IMO goals do not currently exist at a scale or in a form which is commercially viable for widespread use by international shipping, especially for transoceanic voyages. ICS therefore believes that support for massive research and development activity needs to be at the centre of the implementation of the IMO strategy by Member States.
Given the complexities of the politics of climate change, this ‘Paris Agreement for international shipping’ is a genuine achievement of diplomacy. It represents consensus between those nations, including EU Member States, that wish to see dramatic CO2 reductions as soon as possible, and other IMO Member States that have legitimate concerns about the possible impacts on trade and their national economies.

The GHG reduction targets agreed by IMO are very ambitious. A 50% total cut by 2050, regardless of trade growth, is very challenging indeed. The industry also has to deliver a 40% efficiency improvement by 2030, although ICS is confident that this earlier goal can be achieved using existing technologies.

The targets agreed by IMO will hopefully be sufficient to discourage unilateral action given shipping’s vital need for uniform global regulation, bearing in mind that these objectives will be revisited by IMO by 2023, taking account of the improved data on the progress that the shipping sector is making. This information will be derived from the mandatory Fuel Oil Data Collection System (DCS) that IMO established in 2016 and which is now fully up and running. 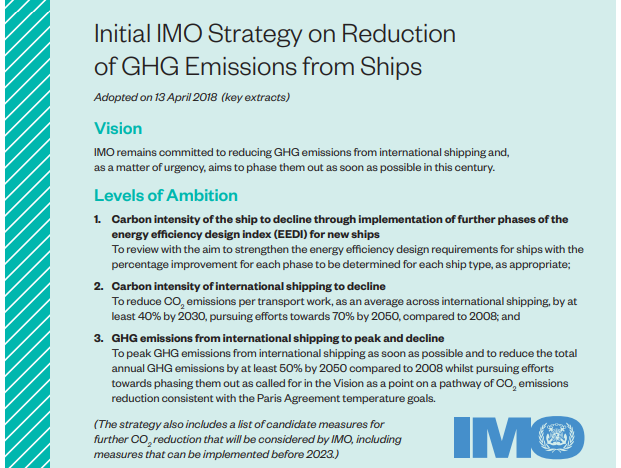 Although the UN Framework Convention on Climate Change (UNFCCC) is applicable to shipping, the sector, together with international aviation, is not covered by the CO2 reduction commitments that governments are required to make with respect to their national economies. This recognises that responsibility for emissions generated by maritime transport cannot be attributed to individual countries. International shipping nevertheless generates about 2% of global CO2 emissions, comparable to an economy such as Germany.

While the UNFCCC Conference in Poland in November 2018 greatly welcomed the adoption of the IMO strategy, progress by IMO on behalf of the shipping sector is still being closely monitored by the international community. Importantly, while the IMO strategy is ‘cognizant’ of the UNFCCC principle of Common but Differentiated Responsibilities and Respective Capabilities (CBDR-RC) whereby parties to the Paris Agreement accept different obligations for addressing climate change – a concept that has great difficulties if applied to international shipping – IMO has also agreed that any new regulations must apply to all ships equally, regardless of flag, which will be vital to prevent market distortion and trade inefficiencies.

The agreed IMO targets are fully consistent with the UNFCCC goal of limiting temperature increases to 1.5 degrees centigrade compared to pre-industrial levels, and are far more ambitious than those so far agreed for aircraft by the International Civil Aviation Organization (ICAO). The latter has currently only agreed a goal of holding the aviation sector’s emissions at 2020 levels.

Decarbonising at a faster rate than the world economy

Indeed, based on the total impact of the commitments so far made by governments as part of the Paris Agreement, successful delivery of the IMO targets will decarbonise shipping at a much faster rate than the rest of the world economy, where emissions are projected to continue increasing for at least a further 10 years. International shipping emissions are believed to be about 8% lower than in 2008, subject to confirmation by the IMO Green House Study in 2019. However, the pressure is now on to make genuine progress with delivering the IMO strategy.

In October 2018, the IMO Marine Environment Protection Committee (MEPC) adopted an Action Plan, which will consider a suite of possible measures for the short, medium and longer term. The immediate priority is for IMO to make progress with short term measures, including the adoption of new regulations that will achieve further CO2 reductions from shipping before 2023. ICS is acutely aware of the political importance that many governments attach to this 2023 date if unilateral or regional rules are to be prevented.

ICS, in co-operation with other industry associations, came forward with detailed proposals which were given initial consideration by the MEPC in May 2019. These industry proposals support a further tightening of the existing Energy Efficiency Design Index (EEDI) for new ships – which already require ships built in 2025 to be 30% more efficient than those delivered in 2013. They also propose the concept of the ‘Super SEEMP’, whereby mandatory Ship Energy Efficiency Management Plans will be subject to some form of external audit as part of the International Management Code for the Safe Operation of Ships and for Pollution Prevention (ISM Code).

In making these proposals, ICS and the industry are trying to offer some viable alternatives to some frankly unrealistic suggestions from some IMO Member States which, if accepted, would lead to serious market distortion. These impractical and unhelpful ideas include operational efficiency indexing of individual ships, mandatory speed limits (as opposed to speed optimisation which ICS fully supports) and mandatory refitting of potentially unproven and immature new technologies which may be inappropriate for many ships and actually counterproductive.
The overriding concern of ICS is that many of these unwelcome proposals confuse the CO2 emissions generated by particular shipping routes and trades with the operational efficiency of individual vessels.

For example, the fuel consumed by two identical ships during two similar voyages will vary considerably due to factors such as currents, ocean conditions and weather. Similarly, fuel consumed by individual ships, particularly those in tramp sectors, may vary considerably from one year to the next, being dependent on changing trading patterns and the nature of charters over which the ship operator has little control.

A ship which predominantly trades in the North Atlantic, the Bay of Biscay or the North Sea will superficially display far worse operational efficiency indicators than a ship which mostly trades in areas like the Gulf of Mexico or the Adriatic. ICS wants IMO to make meaningful progress with short term GHG reduction measures as soon as possible to achieve further measurable GHG reductions by 2023, in addition to the significant reductions already achieved by the sector since 2008.

But while these short term measures will be very important, ICS also wants IMO to move on to developing the critical longer term measures that will truly help the industry to decarbonise completely. It is vital that these discussions begin in earnest during 2020.

In March 2019, ICS and other international shipowner associations made an important submission to IMO in order to highlight the fact that, when account is taken of projections for future trade growth, the industry cannot achieve the 2050 GHG reduction target using fossil fuels alone.

Investment in fuels, propulsion systems and other new technologies

This may require an efficiency improvement of around 90% compared to 2008, which cannot be delivered with current propulsion systems. If the 2050 reduction target is to be met, commercially viable low emission ships need to start appearing on the market by the 2030s.
To reiterate, the technologies necessary to achieve the ambitious IMO GHG reduction goals do not yet exist in a form which is viable for widespread use by international shipping, especially for intercontinental voyages. Over the next decade, the sector is therefore going to require massive investment in research and development of zero (or near zero) CO2 emitting fuels, propulsion systems and other new technologies.
ICS believes that new and innovative measures to encourage research and development must therefore be a key component of the longer term measures that are considered by IMO in 2020, and that work on this needs to be completed before 2023.

ICS, its member national associations, and other international shipowner associations, are currently engaged in intensive discussions on how global GHG reduction research and development programmes might be accelerated and, subject to achieving global consensus, the industry hopes to come forward with some detailed ideas before the end of 2019.