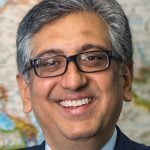 Dr. Anil Sharma is the Founder and CEO of Global Marketing Systems (GMS)—the world’s largest buyer of ships and offshore assets for recycling. Originally from India, Dr. Sharma moved to the USA, where he earned both a Master’s and a Doctorate in Business Administration. He spent the first ten years of his career in academia—as a professor and then chairman of the business department at a state university—before creating GMS in 1992 and becoming a leader in the global ship recycling community.

Dr. Sharma has been invited to speak at major international conferences every year, has served as a judge at various industry awards, and has been published in several shipping and mainstream publications. In recognition of his contributions to the maritime community, Lloyd’s List has ranked Dr. Sharma among the 100 most influential people in shipping for 11 consecutive years. He currently resides in Dubai, where he continues to positively transform ship recycling standards and lead the movement towards responsible ship recycling worldwide.