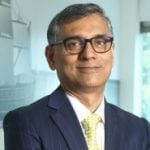 Captain Rajesh Unni is the Founder and CEO of Synergy Marine Group, one of the world’s leading shipmanagers.

In a long and illustrious career, he is recognized as amongst the most influential personalities in the maritime industry globally.

Captain Unni commanded tankers before returning ashore to serve with distinction in senior executive ship management positions in Hong Kong and Singapore. In 2006 he launched his own vessel ownership and management company. Now, with its diverse fleet totalling more than 400 vessels including some of the industry’s most sophisticated designs, Synergy is the ship management partner of choice for the world’s leading owners.

Driven by a firm conviction that shipping must rapidly evolve from analogue to digital, Captain Unni is joint CEO of Alpha Ori Technologies (AOT) which he founded in 2017. He recently established AOT’s Centre of Innovation in Singapore which can remotely monitor, diagnose and control most operational aspects of digital vessels using AOT’s patented software, SMARTShip. This has now received ClassNK approval and installation has been completed on more than 100 ships with another 150 vessels in process.

Education is Captain Unni’s passion. He is a Class 1 Master Mariner graduate from Mumbai’s LBS College of Advanced Maritime Studies and Research and has completed the Advanced Management Programme at Harvard Business School.

Captain Unni sits on the boards of the North P&I Association and the Asia-Pacific Advisory Committee for major classification societies and is a Governor at the Indian Institute of Management, Tiruchirappalli. He is a strategic thought partner with prominent changemaking network Ashoka. And he was recently nominated to the board of the Gandhigram Rural Institute, a university in Tamil Nadu which forms of part of Mahatma Gandhi’s progressive vision for provincial children’s education.

Captain Unni is also a committed philanthropist. As well as being a trustee of the Cochin Cancer Society, he spearheads the Synergy Educational and Charitable Trust which focuses on alleviating poverty, eradicating hunger and empowering women and local communities in their efforts to build a better future.