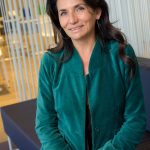 Christine Cabau Woehrel started her career in the maritime transport in 1987 when she joined CMA-CGM, now the fourth largest shipping line in the world. From Line Manager to Member of the Executive Committee, her career in CMA-CGM leads her to the management of several group of lines: Asia-Mediterranean and Asia- Middle East.

When in 2011, Christine Cabau WOEHREL quits the CMA-CGM group, it is still as an expert of shipping matters that she starts a brief experience in the consulting business.

In 2012 she is appointed, by ministerial decree, Chief Executive Officer of the Port of Dunkirk. Two years later, she is appointed at the head of the first French port, Marseille Fos. It is as such that she becomes then Chairwoman of Intermed association.

As from March 2019 she joined back the CMA CM Group, next to Rodolphe Saadé, as Executive Vice President Assets Group in charge of Terminals, Operations, Logistic and Chartering departments.