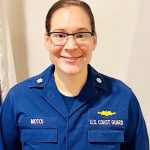 CDR Motoi is the Chief of Plans, Analysis, and Budget division in the Office of Maritime Law Enforcement at Coast Guard Headquarters. In this role, she is responsible for analyzing data required to support budgetary and policy decisions to achieve law enforcement program goals. CDR Motoi also serves as the Special Advisor on Piracy to the Deputy Commandant of Operations. Prior to reporting to Coast Guard Headquarters in August 2020, CDR Motoi served as the Chief of Enforcement at Sector San Diego.

CDR Motoi hails from Staten Island, New York. After graduating from the Coast Guard Academy in 2004 with a Bachelor of Science degree in Management, she served aboard USCGC NORTHLAND as an Engineering Officer in Training followed by an assignment on USCGC MUNRO as Weapons Officer. After serving as Operations Officer on USCGC ALERT in 2011, CDR Motoi attended post graduate school at the University of Rhode Island where she studied Marine Affairs.

Following the completion of her Master’s degree, CDR Motoi reported to Coast Guard District One in Boston, MA as the fisheries officer and helped enforce 20 state/federal fishery management plans with a $13 billion regional economic impact. In 2016, she was assigned to Sector San Diego as the Regional Coordinating Mechanism (ReCoM) Coordinator. The San Diego ReCoM is a body of local, state, and federal partners who share information, resources, and leverage agency authorities and jurisdictions to collaboratively stem illicit trafficking flows within the San Diego area of responsibility. In 2018, CDR Motoi served as the Enforcement Chief at Sector San Diego where she managed law enforcement operations along the U.S./Mexico boundary line.