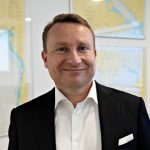 Hans Tino Hansen is founder and CEO of Risk Intelligence. He specialises in intelligence and maritime security risks for shipping, offshore, oil and gas companies. In addition, he has been advising a range of companies and governmental organisations at management level since 2001.

He has led the development of the “Four Circles Model” for understanding the impact of and inter-relation between terrorism, insurgency, organised crime and piracy.

From 2005 the company started analysing piracy in general and Somalia and West African piracy in particular.

During 2007 he started development of the web-based global maritime security risks monitoring solution, MaRisk, which today is used by a number of private companies operating more than 15.4 per cent of the world merchant fleet in and by navies around the world.

He holds a master’s degree in economics from the University of Copenhagen. Prior to his studies he served in the Danish Army for two years and later in the army reserve for eight years.

He has contributed to books on maritime security and is consulted as a commentator by the international and Danish media.