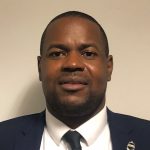 Helio is a Senior Manager (Policy and Employment Affairs) at ICS, which is the international trade association for merchant shipowners and operators, representing all sectors and trades and over 80% of the world merchant fleet.

He has worked in the maritime transport sector for over 10 years and joined ICS in April 2016, where he is:

In this capacity, Helio oversees shipping trade policies and canal related issues, in partnership with ICS members and other industry groups, to strengthen the voice and profile of the global shipping industry with those national governments, intergovernmental organisations and other international industry bodies that impact on international shipping.

Helio is also involved in work related to a number of bodies of the International Maritime Organization (IMO), namely the IMO Council, Facilitation (FAL) Committee and the Sub-Committee on Implementation of IMO Instruments (III). He previously worked at the Permanent Representation of Angola to IMO, the Maritime Organization of West and Central Africa, and at the IMO Sub-Division for Maritime Security and Facilitation.

If you have any questions about our trade policies or shipping canals, please contact Helio.

“About 90% of world trade is carried by sea, which equates to 11 billion tonnes of cargo per year, according to UN estimates. The vast majority of seaborne trade also continues to empower the economies of developing nations. Being from a developing country myself, it is certainly a very exciting time to be working in shipping and coordinating our collective efforts to promote policies based on the principles of open markets and fair competition, to those national, regional and international bodies that have an impact on the industry.”