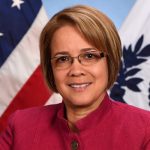 Mrs. Medina has been with the U.S. Coast Guard since 1999, under various capacities.  She is currently the Chief for the Office of Merchant Mariner Credential at the Standards Directorate.  She develops and manages legislative and regulatory issues concerning merchant vessel personnel and labor issues, including the United States compliance with the International Convention on Standards of Training Certification and Watchkeeping for Seafarers, (STCW) 1978, and the Maritime Labor Convention (MLC), 2006.

She continues to coordinate and lead the U.S. delegations to the IMO, on issues related to maritime safety and security, including merchant vessel personnel qualifications and training, and human element.  In addition, she also leads the U.S. delegations to the ILO on maritime labor issues; and to the WHO on maritime medical issues.  She currently chairs the IMO Human Element, Training and Watchkeeping (HTW) sub-committee.

Mrs. Medina continues to distinguish herself as the domestic and international authority in the areas of seafarer training and credentialing, and maritime labor issues.  Her advice and counsel is frequently sought by international organizations, industry and other administrations.  She lends her expertise to the IMO, ILO, as an expert to assist other countries to establish their national infrastructures in compliance with international Conventions.