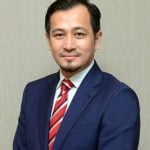 Mohamed Safwan Othman joined Dinastia Jati Sdn Bhd as Senior Manager Finance & Admin on 1st November 2012. Currently, he is the President / Group Managing Director for Dinastia Group of Companies. He held the position of President of Malaysia OSV Owners’ Association (MOSVA) for 2018-2021. He has been elected as the Chairman of Malaysian Shipowners’ Association (MASA) for the term of 2021-2023.

Safwan Othman holds a Bachelor of Science Degree with Honours from
University of Salford, United Kingdom. Later, he attained Master of Science (MSc) in Finance & Islamic Banking from one of prestigious business schools in the world, the London School of Business in United Kingdom.

He has about a year of experience in the fields of financial and general
management in the oil and gas industry and was previously the Cost Controller for Shapadu Energy & Engineering Sdn. Bhd., a position he held after graduating from his MSc. He managed all the company’s project budget worth, totaling RM 700 million.

He was also formerly attached with Islamic GDP(UK), an Islamic Finance consultancy firm, which is based in London, United Kingdom. He did numerous financial planning and Shariah re-structuring programmes for banks in the United Kingdom, Middle East and East Asia.

Safwan Othman has a clear vision and well panned expansion programme in order for Dinastia Jati to become the main player in the Oil & Gas and Bulk cargo for the energy industry. He also believes that Dinastia Jati has the capability to compete internationally. Looking forward, he also plans to diversify the current business.