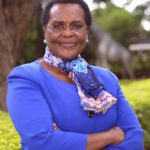 Mrs. Karigithu who is currently the Principal Secretary, State Department for Shipping and Maritime in the Ministry of Transport, Infrastructure, Housing, Urban Development and Public Works. She holds a Bachelor’s degree in law from the University of Nairobi and a master’s degree in International Maritime law from the IMO International Maritime Law Institute, Malta. She was the Director General (DG) of Kenya Maritime Authority (KMA) where she served as such for nine (9) years.  She also served as the Chair of the International Maritime Authority (IMO) for three (3) terms and she currently sits on the Board of Governors of the World Maritime University (WMU), based in Malmo, Sweden.

She has a working experience of 30 years, 26 of them in the maritime industry. As the first substantive Director General of Kenya Maritime Authority where she served for 9 years, she updated the legal framework for maritime activities in Kenya, business plans, annual operating budgets and generally advising the Government on maritime issues.

Previous work experience includes a stint State Counsel in the Office of the Attorney General, Senior Legal Officer at the Kenya Ports Authority (KPA) where she rose to the post of an acting Assistant Corporation Secretary. In 1995 Mrs. Karigithu resigned from KPA to set up a private legal consultancy firm, she also consulted extensively for IMO in sub-Sahara Africa in the Economic Commission for Africa (ECA), the East African Community and the African Union (AU).  Between 2004 and 2005, she served as Transport Expert for the African Union.  In this capacity she engaged on advising governments in the region on the setting up of independent maritime administrations and strengthening of maritime legal frameworks.

Mrs. Karigithu is a regular speaker at international conferences and seminars on topics dealing with maritime transport, safety and security as well as strengthening maritime administrations.

She was involved in the setting up and launch of the Association of Women in the Maritime Sector in Eastern & Southern Africa (WOMESA) where she served for two terms as a Chairperson and now sits on the governing council. WOMESA is a first regional body which brings together women professionals in the maritime sector of 26 countries in Eastern and Southern Africa.

Mrs. Karigithu also organized the first National Maritime Conference which took place in February, 2015 and brought together key stakeholders of the international maritime industry to Kenya.

Before her present appointment Mrs. Karigithu was working as a short term legal expert for the European Union (EU) project Critical Maritime Routes, aimed at enhancing Maritime situational awareness in the Indian Ocean.

Recently, Mrs. Karigithu was feted and honored for honorary fellowship by the World Maritime University during the Graduation Ceremony which was held in 3rd November, 2019 in Malmo, Sweden because of her distinguished service in the maritime sector.