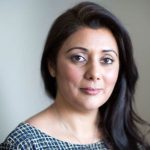 Nusrat Ghani is the Conservative MP for Wealden, East Sussex. Nusrat arrived in Parliament in 2015, the first female MP to hold the seat. Soon after, she began serving on various influential Committees including both the Foreign Affairs and Home Affairs Committees. Her work here covered issues such as such as Daesh, policing, counter-terrorism strategies and the refugee crisis.

Nusrat was promoted within the party and became Minister for Transport in 2018, overseeing a diverse portfolio in the Department as Minister for Maritime and Minister for the Year of Engineering. Her work covered maritime, HS2, buses and taxis, as well as accessibility across all modes of transport. She made British history again by being the first Muslim woman to speak from the Dispatch Box as a Minister.

A senior fellow at the influential think tank Policy Exchange, she published “A Global Maritime Power: Building a Better Future For Post-Brexit Britain”. Nusrat retains a deep interest in all matters maritime and is in regular contact with many industry leaders from around the world. She had a long and varied career in the private sector prior to entering politics. She Chaired the Government’s Rural Affairs Group and works closely with farmers and the NFU.

Nusrat now sits on the influential Business, Energy and Industrial Strategy (BEIS) Committee. Here, she has led inquiries into forced labour in UK supply chains, with a particular focus on Xinjiang, China. An advocate for supply chain transparency, she was sanctioned by the Chinese Communist Party in March 2021, the only woman in Parliament to be so, in an unprecedented move by the CCP to silence and intimidate those who speak out.

Nusrat is a member of the NATO Parliamentary Assembly and is the rapporteur of the Science and Technology Committee. She has recently published a report on AI defence and security. The proposal is to increase collaboration and engagement with our Asian partners, in particular Japan and the Republic of Korea. Nusrat was nominated by NATO Parliamentary Assembly for the 2021 NATO PA Women for Peace and Security Award. Nusrat was a runner up to Nancy Pelosi, Speaker of the United States House of Representatives who won the prestigious accolade.

In July 2021 Nusrat was elected by her Conservative colleagues to be their representative on the powerful back bench 1922 Committee as Vice-Chair.