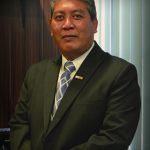 Mr Shaharuzzaman joined MASA in February 2012 as General Manager and was appointed as Secretary General on 1st January 2018. He is responsible for the day-to-day operations and activities of MASA. He was attached with Malaysia’s largest dredging and reclamation company prior to joining the association.

Some of MASA’s achievements include MASA engagement with GLCs such as PETRONAS, TNB Fuel, Sime Darby, etc. on the usage of
Malaysian vessels by genuine local shipping companies, with very positive responses.  The recent approval by MOF for the extension of the 100% Income Tax exemption under Section 54A of the Income Tax Act 1967 for a period of three years until the year of assessment 2023 shouldn’t be discounted as MASA has been tirelessly meeting up and having discussion with related government authorities for that.