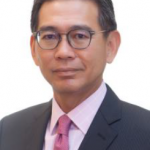 Prior to his current appointment, Ambassador Tan served as Singapore’s Permanent Representative to ASEAN from August 2013 to January 2019.

Ambassador Tan also served as Singapore’s Ambassador to the Arab Republic of Egypt, with concurrent accreditation to Libya, from July 2009 to July 2013. He was also concurrently accredited to the State of Kuwait until October 2012.

Ambassador Tan graduated from the National University of Singapore and did post-graduate studies at the University of London, School of Oriental and African Studies (SOAS), United Kingdom, under the Raffles/Chevening Scholarship.

Ambassador Tan joined the Ministry of Foreign Affairs in 1990 and has worked in various capacities on issues related to International Organisations, ASEAN and the Middle East.

Ambassador Tan is married to Mdm Kayo Suzuki and they have two daughters.