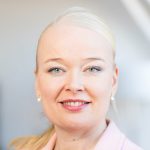 Tiina Tuurnala (MSc. Engineering) has been the CEO of the Finnish Shipowners’ Association since 2017.

Tiina began her career in the field of hydrography with the Finnish Maritime Administration in the early 1990’s. With the establishment of the Finnish Transport Agency in 2010 Tiina was appointed Development Director.