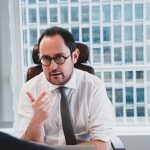 Deputy Prime Minister and Minister of Justice and the North Sea, Belgium

Vincent Van Quickenborne (48) stormed into Belgian national politics over two decades ago. At that time, he was 25 and the youngest senator.

As Secretary of State for Administrative Reform (2003-2007), he turned Belgium into the 3rd fastest country in the world to start a business in (Doing Business 2008, World Bank).

From 2008 until 2011, as Minister of Economy and Reform, he stimulated the entrepreneurial spirit and kept cutting down on red tape.
In 2010 he was selected as “Young Global Leader” by the World Economic Forum.

In 2011 and 2012, as Deputy Prime Minister and Minister of Pensions, he put in place socioeconomic reforms that strengthened and safeguarded the Belgian pension system and the welfare state.

In 2013 he became mayor of the city of Kortrijk, striving to make it the best city of Flanders.

As of October 2020, Vincent serves as Belgium’s Deputy Prime Minister and Minister of Justice and the North Sea. His policy focuses on making the Belgian Justice system faster, stricter and more humane, with a special emphasis on digital transformation.