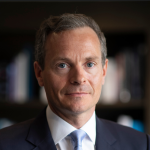 William started his career in shipping at the turn of the century after a brief foray into the world of investment banking. Having joined H Clarkson & Co in London as a shipbroker he shortly thereafter relocated to Hong Kong where he worked in a variety of roles across the chartering, projects and shipowning divisions. In 2006 William left Clarksons to become a co-founder of the Hong Kong-based shipowner Mandarin Shipping Limited, where he remains a director. In 2016 William was elected to the board of Wah Kwong Maritime Transport Holdings Limited and in 2019 he took on the role of Managing Director. William is a graduate of Edinburgh University.