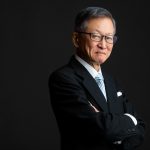 Yuichi Sonoda is the Secretary General of the Asian Shipowners’ Association (ASA), a post he has held since 01 May 2022. Based in Singapore, Mr Sonoda has previously served as ASA Sec-Gen between 2010 and 2014, and was instrumental in several initiatives and conferences.

Involved in the works of ASA since its inception in 1992, (known then as Asian Shipowners’ Forum), Sonoda has been tirelessly supporting and promoting its vision and missions. In 1996, he was appointed as the Secretary of the Shipping Economics Review Committee (SERC), one of the five Standing Committees of ASF.  He has also served as the Vice Chairman of the Maritime Transport Committee of Business and Industry Advisory Committee (BIAC) to the OECD.

Upon his graduation with a law degree from the Keio University in Tokyo in 1976, Sonoda joined the JSA, and was mainly involved in the works of the International Affairs Division.  During his tenure at JSA, he was also appointed to JSA’s London Branch Office for a period of five years.