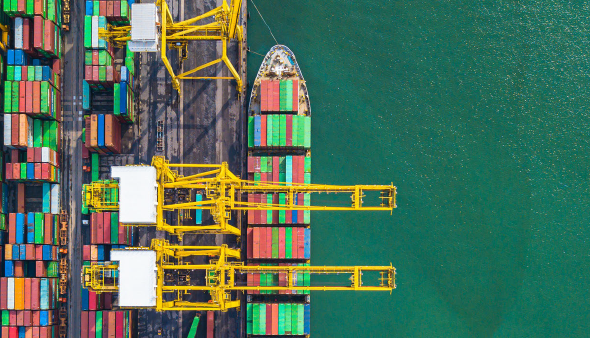 Brussels, 4 October 2022 – To serve as many ports and customers as possible, as efficiently as possible, international ocean carriers often share space on vessels. Vessel sharing benefiting the EU is regulated through the Consortia Block Exemption Regulation (CBER), which expires in April 2024 and is now under review by the European Commission’s DG COMP. The World Shipping Council (WSC), the International Chamber of Shipping (ICS), and the Asian Shipowners’ Association (ASA) have submitted their input to the European Commission, calling for a renewal of the CBER and demonstrating how vessel sharing contributes to the EU policy goals of reducing transport emissions, increasing competitiveness and improving efficiency to reduce costs.

Vessel sharing is a purely operational measure that enables carriers to use ships more efficiently whilst continuing to compete on price and other commercial terms. Vessel sharing expands the range of destinations and services available to customers and reduces empty space onboard ships, lowering emissions. The CBER facilitates vessel sharing by providing a sector-specific legal framework.

“From an operational and environmental perspective, vessel sharing is like public transport and car-pooling schemes: seeking to maximise efficiency and reduce emissions through the shared use of
transport assets and infrastructure, significantly reducing emissions per unit of cargo transported,” says Yuichi Sonoda, Secretary General of Asian Shipowners Association.

The Commission’s evaluation of the CBER takes place against the backdrop of an unprecedented global crisis. COVID-19 disrupted the intermodal supply chain worldwide, creating substantial bottlenecks at marine terminals, inland warehouses and distribution centres, and in the truck, rail, and barge systems that connect ports with the hinterland. Those landside issues in turn caused back-ups of ships outside of ports, significantly reducing the effective vessel capacity even as ocean carriers deployed every available owned and chartered containership. Reliability suffered and prices increased.

“The frustration that shippers have understandably experienced from service delays and increased cost has been channelled towards carriers, their vessel sharing arrangements, and the regulatory tools
which facilitate such arrangements, including the CBER. But data shows and regulators concur that the problems were caused by factors outside carriers’ control and not by vessel sharing,” says John Butler, President & CEO of World Shipping Council.

“Vessel sharing is a tool that has been recognized by regulators around the world as providing a foundation for the reliable movement of international trade. As we come out of the pandemic and markets normalize, we need common and predictable regulations across the globe in order to help transportation and trade networks to stabilize,” says Guy Platten, Secretary General of the International Chamber of Shipping.

The CBER is an essential regulatory tool that yields significant benefits to the EU, with no downside from a competition or consumer welfare perspective. The European Commission should uphold the CBER, to ensure continued efficient and competitive ocean transport for European shippers and consumers, while meeting climate goals.

Download the WSC, ICS and ASA submission to the European Commission on the renewal of the CBER.

Read more about the role of vessel sharing agreements

Whilst EU Block Exemption Regulations for consortia have been continuously in place since 1995, the Commission first adopted the CBER in its current form in 2009. It was adopted for a period of five years and, since then, it has been extended twice following Commission evaluations (first in 2014 and again in 2020). The CBER is due to expire on 25 April 2024 unless the present Evaluation results in a further extension.

The EU BER provides a clear legal framework within which ocean carriers can set up vessel sharing arrangements (VSAs) to improve operational efficiency without risking breach of competition laws. The CBER:
• Applies only for ocean carriers with a combined market share of below 30%
• Allows for vessel sharing agreements only, to improve service and efficiency
• Strictly prohibits exchange of information on rates. Each member of a VSA determines its own commercial terms, including prices.
• Carriers within a VSA compete with each other, and with other carriers outside of that VSA, when selling their services to customers. Additionally, carriers offer and add their own services outside of VSAs

The World Shipping Council is the united voice of liner shipping, working with policymakers and industry groups to shape the future growth of a socially responsible, environmentally sustainable, safe, and secure shipping industry. We are a nonprofit trade association with offices in Brussels, Singapore and Washington, D.C. The WSC has observer status at the UN IMO. Read more at www.worldshipping.or

About ASA
As one of the important shipping organizations in the world, it consists of members from the shipowners’ associations of Asia Pacific nations, i.e. Australia, China, Hong Kong, Japan, Korea, Chinese Taipei and Federation of ASEAN Shipowners’ Associations (FASA), consisting of Brunei, Indonesia, Malaysia, Myanmar, the Philippines, Singapore, Thailand and Vietnam. The ASA membership together is estimated to control about 52% of the world merchant fleet today.

About ICS
The International Chamber of Shipping (ICS) is the principal international trade association for merchant shipowners and operators, representing all sectors and trades and over 80% of the world merchant fleet.

Carbon capture: a solution out of thin air?