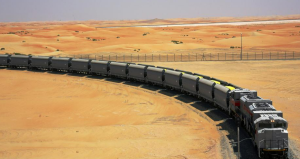 The ambitious development of the UAE National Rail Network or Etihad Railway has reached a milestone with the connection of what is set to be the nation’s largest inland freight terminal, based at the Industrial City of Abu Dhabi (ICAD).

The major investment is one of many projects underway or being explored by governments globally, as well as major e-commerce giants such as Amazon, as they seek to boost economic growth and stabilise global supply chains.

The ICAD terminal will operate 24/7 and its owners forecast an annual throughput of 15m tonnes of bulk goods, 1.5m tonnes of general cargo and 116,600 teu.

H.E. Eng. Hessa Al Malek, Advisor to the Minister for Maritime Transport Affairs, UAE Ministry of Energy and Infrastructure told ICS Leadership Insights that the Etihad Railway is one of the key accelerators and facilitators of the UAE’s Maritime Network Initiative, and that the connection of ICAD was a milestone in the network’s roll out.

The Maritime Network Initiative includes accelerator projects, a unified portal for maritime companies and collaboration between the government and private sectors.

“The railway freight terminal will act as a logistics hub for heavy industries enabling a seamless distribution of raw materials and machinery for manufacturers, in addition to facilitating better connections to vital trade infrastructure, such as ports,” said Malek.

The Etihad Railway network is around 70% complete and will stretch from Al Ghuwaifat on the border with Saudi Arabia in the West through to Fujairah on the Eastern tip of the UAE. Crucially for the freight sector, the line will connect significant bulk and container terminals including Jebel Ali port, Khalifa Port, Khalifa Industrial Zone, and the Port of Fujairah to industrial centres, quarries and manufacturing zones.

The scope of regional benefits from rail connectivity further widened with the signing of a $3bn deal to connect Oman Rail to Etihad Rail, bringing a connection between the UAE and Oman’s Sohar Port and the Omani free zone.

It is not just the UAE looking into the benefits of greater rail connectivity and investment. The Centralny Port Komunikacyjny (CPK) is a new transport development program in Poland, dubbed “extremely important for the economic growth of the country…and of utmost importance [for] the security of Europe as a whole”. This multi-billion project (the first phase is expected to cost €2bn) will bring together major investment in individual infrastructure projects in air, road and rail, including a multimodal transport hub, connecting a new airport in central Poland with the country’s main rail transfer port.

Meanwhile, Australia’s Federal Government has recently announced an independent review of its AUD $14.5bn Inland Rail Project, which is hoped will create new intermodal terminals to be built in Melbourne and Brisbane to improve rail links to the ports and cities. It will look into potential routes and multiple challenges that may prevent its implementation, including safety, costs and schedule.

It isn’t just governments making such investments. In its continued bid to become an end-to-end logistics provider, encompassing road, rail, air and sea, e-commerce giant Amazon is currently seeking to strengthen its presence in the rail freight space in the US by opening up the capacity of its fleet of 53-foot intermodal containers to other shippers.

However, such projects pose massive costs and logistical challenges, including a lack of rolling stock, drivers and redundancy of tracks and capacity at port rail yards. As such, projects are liable to meet roadblocks and face delays. For example, Columbia is seeking to revitalise its railway structure and further connect with ports, with an additional 652km of rail track. However, of the 30 rail projects to have been submitted to be constructed none have yet passed the feasibility stage due to the high levels of investment required.

A recent report from IAPH underlines the gaps currently being faced by port infrastructure globally.