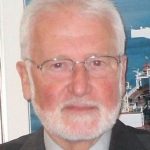 Kenneth Macleod is a Master Mariner with over 60 years marine industry experience, commencing his career at sea as a Galley Boy in 1959 before joining J&J Denholm in 1960 as an Apprentice Deck Officer.

He is a non-executive Director of Stena UK Ltd and has been with Stena for over 40 years in senior management positions, having established and operated Northern Marine Management, Stena’s International ship management company.

Ken is very active in his support for charities both within the marine sector and on a personal level. He received an Order of the British Empire (OBE) for services to the shipping industry and charity in 2014.