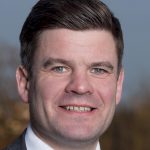 Lasse Kristoffersen was appointed CEO of Torvald Klaveness in 2011 as the first company CEO from outside the Klaveness family. He started working for the company in 2007, heading up the business unit Klaveness Maritime Logistics

Kristoffersen holds the following board positions: