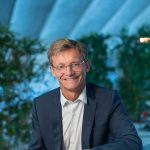 Matthieu de Tugny began his career at Bureau Veritas in 1994, where he successively held different roles both in France and abroad. From 2007-2012 he was Regional Chief Executive for Marine & Offshore activities in North America, based in Houston, before being promoted to Vice President for South Asia, based in Singapore. He was appointed Chief Operations Officer of the Marine & Offshore Division in 2017 and became President in January 2019.

He is a graduate of both the Ecole Nationale de la Marine Marchande and the Ecole Supérieure d’Electricité in France.