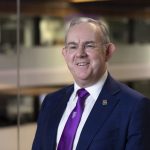 Dr Paul Little is Founding Principal and Chief Executive of City of Glasgow College, twice shortlisted for the prestigious Stirling Prize for architecture.

As WorldSkills UK ambassador for Scotland, he has overseen the creation of a WS Academy and the City of Glasgow College’s consistent top two ranking in the WS UK league.

A distinguished and published academic, he has been recognised with five Fellowships including the Royal Society of Edinburgh. He is President of the Glasgow Chamber of Commerce; Chair of the Scottish Funding Council’s Skills Enhancement access and Learning committee; Chair of the UK Merchant Navy Board’s Futures Committee and Vice-Chair of Colleges Scotland Employers Association.

On the global stage, Principal Little is regarded as merger expert and inspirational thought leader. He has also been awarded an honorary doctorate from Chennai, India and the Wallace Medal in New York for transatlantic relations. A Harvard Business School Graduate and leadership scholar, he has successfully transformed and led five UK Colleges, gaining Beacon status and Queens’s Anniversary Award status during over 30 years of his career.

Away from the office, Paul is a keen yachtsman, with a lifetime commitment to the maritime sector. As a veteran search and rescue officer with HM Coastguard he was awarded three Search and Rescue Medals and he is a fellow of the Nautical Institute, a Younger Brother of Trinity House, Director of the Scottish Maritime Cluster, Chair of the UK Merchant Navy Board’s Futures Committee and member of the UK Merchant Navy Training Board as well as President of the Glasgow Sea Cadets.

He was most recently appointed by Her Majesty The Queen to the senior rank of Honorary Captain in the Royal Navy Reserve, in recognition of his passion for the maritime sector and personal support of the Royal Navy.