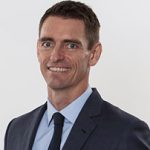 Rasmus Bach Nielsen joined Trafigura in August 2014 as Global Head of Wet Freight. During his five years in this role he helped transform the wet freight book into one of the global leading players in the market and oversaw more than USD3 billion of transactions during 2017-2019.

In August 2020, Rasmus took up the newly established role of Global Head of Fuel Decarbonisation with the objective of reducing the Group’s shipping emission footprint. Working closely with Trafigura’s Power and Renewables team, Rasmus also focuses on project origination around green fuels and their possible off-takes and furthermore serves as a non-executive Director for TFG Marine.

Prior to joining Trafigura, Rasmus spent 15 years with various shipowners based in Singapore, Monaco and Copenhagen. He initially trained in A.P Moeller Group and Maersk Tankers trading handy size and tankers. Rasmus then moved to Scorpio Tankers to trade Panamax tankers primarily in the European and American markets. This was followed by a move to Singapore in 2007 where he opened and headed the office for another Italian shipowner. In 2012 he joined Navig8 Group where he was part of the team concluding more than 70 new build tankers at various shipyards in China, Korea and Japan while also assisting the Navig8 Group’s equity raising efforts in Asia.