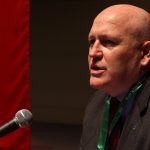 Under his leadership, the ITF has transformed into a proactive campaigning organisation, allowing the ITF and its affiliates to secure industry-leading contracts and protocols with key multinational companies in the transport sector.

He is Chair of the Council of Global Unions (CGU), a Trustee of the ITF Seafarers’ Trust and serves on the United Seaman’s Service (USS) governing body. In 2014, Cotton received the USS Admiral of the Ocean Sea (AOTOS) Award, in recognition of his work defending the well-being and fair treatment of seafarers.