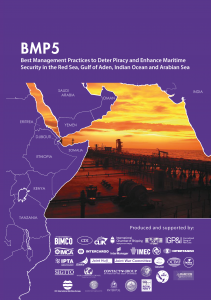 Seafarers have encountered different security threats when operating ships in the Red Sea, the Gulf of Aden, the Indian Ocean and the Arabian Sea.

The purpose of Best Management Practices to Deter Piracy and Enhance Maritime Security in the Red Sea, Gulf of Aden, Indian Ocean and Arabian Sea is to help ships plan their voyage and to detect, avoid, deter, delay and report attacks. Experience has shown application of the recommendations in this publication makes a significant difference to the safety of seafarers.

Piracy-specific Best Management Practice (BMP), international navies and capacity building ashore have helped to suppress piracy. However, Somali piracy has not been eradicated and remains a threat. The BMP contained in this publication mitigates the risk from piracy and other maritime security threats. Regional instability has introduced other maritime security threats, which include:

BMP piracy measures are effective, but differences in attack methods from other threats may require other forms of mitigation. For example, attacks carried out by extremists may be more determined, as they may be willing to risk their lives. The consequences of not adopting effective security measures can be severe. Some pirates have subjected hostages to violence and other ill treatment and periods of captivity form some hijacked seafarers have lasted for several years. Other attacks have demonstrated an intent to damage ships and endanger life.

The release of BMP 5 coincided with the launch of a new website www.maritimeglobalsecurity.org which provides free security related guidance, together with access to best practice guides, including BMP5. The website brings together several types of security risks to ships including piracy, cyber, migration, stowaways, smuggling and armed conflicts and war.

BMP 4 – Best Management Practices for Protection against Somali Based Piracy