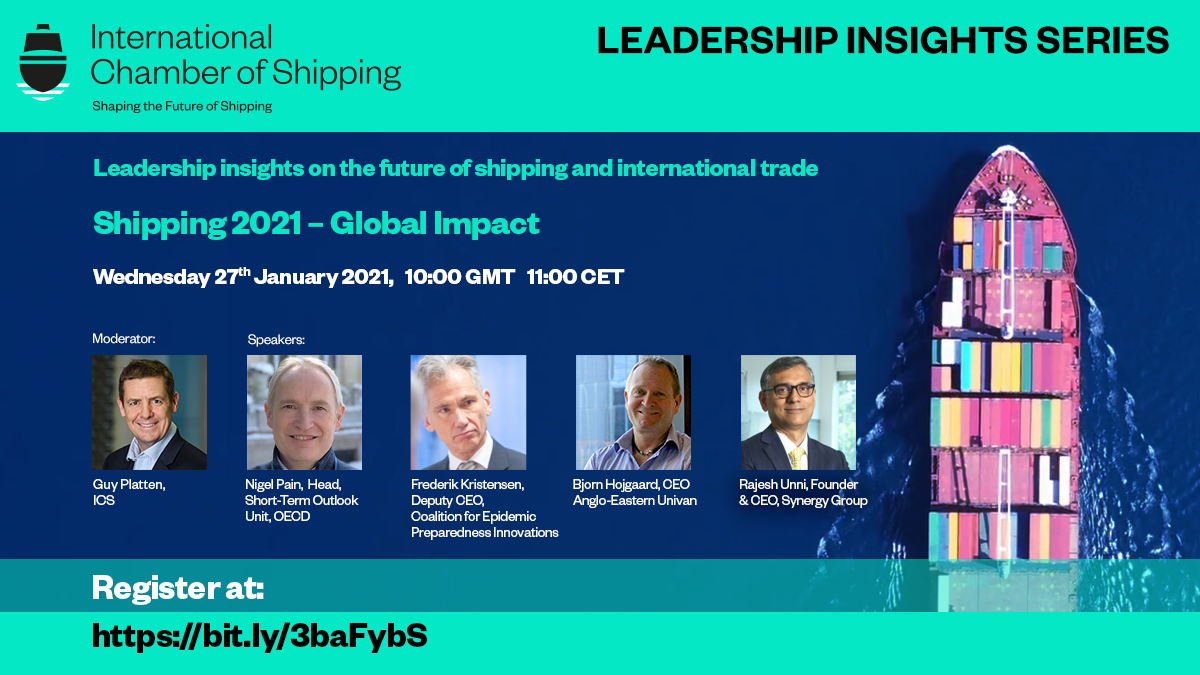 Leaders in shipping, economics and pandemic preparedness discussed how the shipping industry can overcome key challenges presented by COVID-19 at the latest Leadership Insights Series on 27 January.

At the Shipping 2021 – Global Impact discussion Guy Platten, Secretary General of the International Chamber of Shipping, kicked off the conversation by asking a crucial question for the industry:

“With close to 90 percent of global trade transported by commercial shipping, this sector is critical to economic recovery. If the economy falters or fails to recover, the effects on shipping will certainly be felt. A key pillar to any post COVID-19 recovery is the effective and equitable global rollout of COVID-19 vaccines. Shipping has a key part to play in delivering the vaccine and associated supplies across the world. But as they are away from home for months at a time, who is responsible for making sure that seafarers are vaccinated?”

Highlighting the slow response to aid crew from governments around the world in 2020, Bjorn Hogaard, CEO of Anglo-Eastern Univan said:

“It was shameful to see the sort of ‘beggar thy neighbour’ policies adopted by governments around the world. Governments act as though they like the cargo, like cargo ships, but do not want to support seafarers. At the end of the year, I hope that all seafarers really do have key worker status, that they are prioritised for the vaccination, that they have open border on which to do crew rotations, and that they can get flights home.”

“With the Neptune Declaration, I am reasonably confident and positive about the commitment that has come from the industry. We have key worker standards that are now being followed by countries rather than just saying the right thing. We will need the ports that the ships are calling into to accept that seafarers are key workers and also include them in the priority status so they actually get vaccinated in port. We need a two-pronged approach that does not just rely on the crew supply nations.”

However, despite Dr Frederik Kristensen, Deputy Chief Executive of the Coalition for Epidemic Preparedness Innovations stating that the need for seafarers to be vaccinated is understood, he said there is a “strong argument to start with the most vulnerable first”. This, he admitted is a nuanced issue.

What was clear from discussions is that an equitable distribution of vaccinations around the world will be needed if we are to see global economic recovery.

Nigel Pain, Head of the OECD’s Short Term Outlook Unit said: “An open question is whether the global economy will ever regain the level of output expected before the pandemic. It is a global crisis that has hit everybody, and a global crisis requires global solutions. While many advanced economies are making progress with the rollout of the vaccines and their plans, there is a lot of uncertainty about what is going to happen in emerging economies. It is only when vaccines have been deployed fully in all economies of the world that we improve our prospects of gaining a full recovery across the world.”

Remarking on the lack of a global vaccine distribution effort, Kristensen spoke of the work being done to remedy this by COVAX, part of the World Health Organizations COVID-19 Tools Accelerator:

“COVAX is the only global game in town. It is trying to get some people vaccinated in all countries rather than all people vaccinated in some countries, which is the situation now. During Q1 there will be a rollout of COVAX including 92 lower- and middle-income countries. By the end of this year there will be 2 billion doses distributed by COVAX. At the moment there is a disparity in distribution between developed and emerging economies and that is causing unrest.”

On what to expect post-pandemic, Pain concluded: “All governments are looking at ways to make their supply chains more resilient and that is going to involve some change. It is too early to tell whether that will look like local supply chains or greater diversification of supply chains. The costs involved will be higher and that will push up cost to consumer or hit the profits of companies.”

Listen to the full webinar here.

Coronavirus (COVID-19): Protocols to Mitigate the Risks of Cases On Board Ships